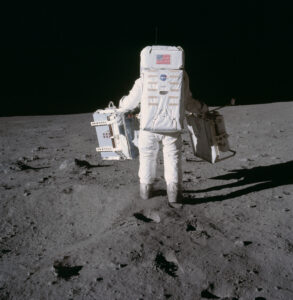 According to NASA, approximately 650 million people watched the Apollo 11 Moon landing on TV. That was fifty years ago this month. Half a century. But the images and narratives of the event remain with us today, at least in indirect form. Apollo lasts because cultural memory is at play, by which I mean the type of unspecific memory that makes an event part of a culture without necessarily preserving the details. I suspect that there are many current high schoolers who wouldn’t be able to recall Neil Armstrong or Buzz Aldrin’s names. However, the imagery and influence of the space race continues to thrive, even among people with no firsthand memory of the events. On the 50th anniversary of the moon landing, this cultural memory bears examining, as well as how cultural memory works in general.

Last month, D-Day was remembered on its 75th anniversary. The number of living people who were adults, or near-adults, during WWII dwindles daily, but the big events of the war continue to inform Americans’ view of their place in the world order.

Alongside celebrations of the D-Day anniversary, however, I also heard a repeated complaint: D-Day is being forgotten. Kids in school today—not to mention many adults—may know little of the bloody battle being commemorated, if they know it at all. What was one of the most important events of the 20th century is turning into a footnote in an ever-shrinking chapter on WWII.

I don’t consider this type of forgetting to be a problem, though. Time always serves to diminish the importance of historical events. For example, I couldn’t tell you much of anything about the Wars of the Roses, and hardly anyone would fault me for that. Most people don’t deem a very old war to be worthy of detailed remembrance. We can’t remember everything, so we focus on more recent and pressing concerns.

Whether we like it or not, this is where the history of WWII is heading. A child born today could conceivably never meet someone old enough to remember the events of 1945.

What interests me, though, is not this act of forgetting. Instead, I’m fascinated by the way cultural memory persists even when specifics of the history being remembered are lost. I suspect far more people would recognize the photo of the flag-raising on Iwo Jima than would remember the name of that particular island or details of the Pacific campaign.

These images and narratives were so prominent for so long, they continue to influence people who have no direct connection to them. This indirect, possibly unnoticed influence is what I mean by cultural memory. Even if a child born today might never know D-Day or the names of Allied generals, they’ll have some gut-level understanding of “storming the beach,” or they’ll grapple with America’s self-image, which evolved in the aftermath of WWII.

I first noticed the phenomenon of cultural memory in anime and manga, Japanese animation and comic books. The influence of the Hiroshima and Nagasaki bombings regularly turns up in storylines about cities, towns, and villages being obliterated.

In Naruto, a popular and long-running manga/anime about a young ninja, the titular character’s home village faces repeated threats of destruction. This culminates with the villain Pain completely wiping out the village from above, a clear parallel to the detonation of the bomb Little Boy over Hiroshima.

In the classic 1995 anime Neon Genesis Evangelion, re-released on Netflix last month, a series of “angels” arrive, each threatening to destroy the city of Tokyo-3.

Not only is the repeated theme of city-wide destruction striking, so too are the visuals. Mushroom clouds abound. Renderings of utter devastation clearly borrow from the nuclear aftermath, as well.

I’ve traced this nuclear narrative in Japanese popular culture back to the original Godzilla (1954), in which a radioactive monster rises from the sea and destroys Tokyo. The monster is the physical incarnation of the nuclear threat. The memory of the tragedy is given a reptilian face to make it more understandable.

Godzilla was created by filmmakers grappling with first-hand memories of nuclear destruction. Naruto’s creator Masashi Kishimoto, however, wasn’t born until 1974, almost 30 years after the bombings. Had he seen Godzilla and had the idea of a city under threat made familiar to him? Did he watch Evangelion when it first aired in the mid-nineties? Was he even aware that his work referred to a vernacular cultural memory of the bombings?

Looking back at the Moon landing, cultural memory has been at play since the moment Eagle landed. Even before. How many astronaut Halloween costumes were there in the 1960s?

In 1981, MTV launched its first broadcast with doctored video from a moon mission (the American flag was replaced with the MTV logo). This video played at the top of every hour on the channel for five years. MTV still gives out “moonman” trophies at the annual Video Music Awards.

If I ask ten people to imagine an astronaut walking on another planet, I suspect all ten would share similar details. Stiff movements, almost as if in slow-motion. Big, bounding steps. That’s how the video from the moon made the astronauts look. But more importantly, that’s how most fictional representation of astronauts in film and TV have depicted astronauts for decades. Even someone who’s never watched a second of video taken on the actual moon would imagine an astronaut’s movement this way.

Recently, I’ve seen NASA-branded t-shirts for sale in H&M and Target and American Eagle. On the t-shirt website Threadless alone, I found over forty space-themed designs. There are NASA backpacks and hats and a line of shoes. It seems many of us still dream of being astronauts when we grow up. At the very least, the memory of that dream persists.

Humanity forgets many things, but cultural memory preserves the largest events, not by sharing the specifics, but by passing on general impressions and broad implications. The Moon landing was one of these large events, and it seems poised to remain part of our active culture through another fifty years.

By then, we’ll have hopefully been to Mars, and it’s anyone’s guess which first step will be better remembered.